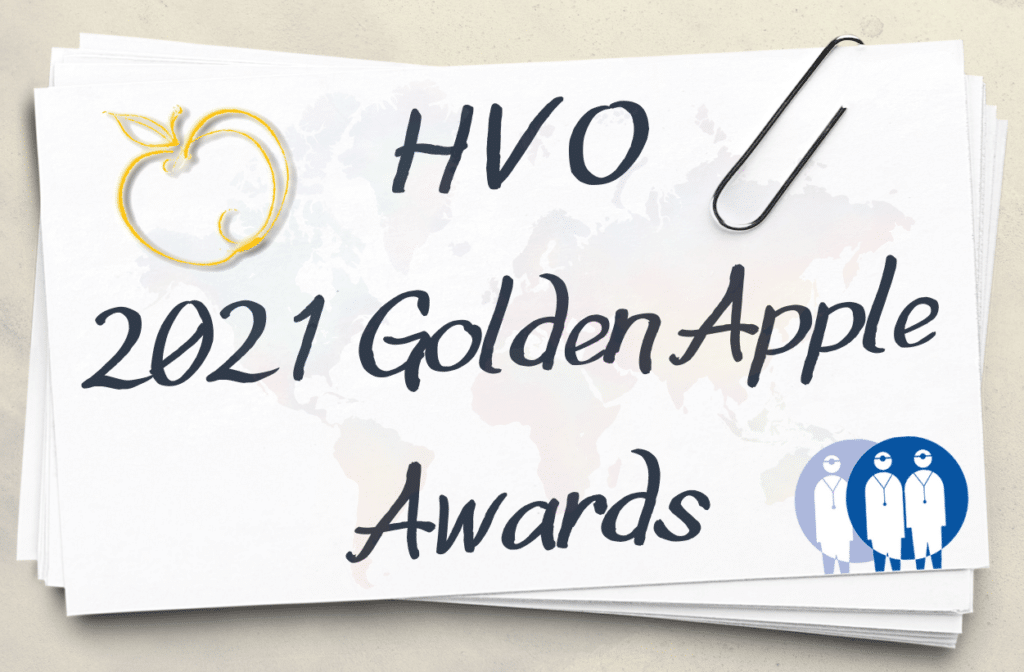 Since 2006, the Golden Apple Award has recognized the members, volunteers, partners and supporters who make extraordinary contribution to the sustainability and effectiveness of Health Volunteers Overseas.

Dr. Habib Ghaddar first volunteered with HVO’s oncology project in Bhutan at Jigme Dorji Wangchuck National Referral Hospital in 2016. Since then, he has volunteered twice more in Bhutan and once in Nepal. In 2019 when the oncology project in Bhutan started to shift towards palliative care, Dr. Ghaddar became a project co-director. In that role, he has worked to develop a close relationship with the three palliative care nurses in Bhutan and mentored short and long-term volunteers.

During the past year when HVO has been unable to send in-person volunteers, Dr. Ghaddar initiated weekly case-based learning conferences with the palliative care nurses. Despite the time difference, Dr. Ghaddar made himself available each week for these calls. He also worked with his project co-directors to orient HVO oncology volunteers to Bhutan so they could also participate. His teaching skills and sensitivity to cultural norms are evident in the enthusiasm the palliative care nurses have shown through their eager attendance, willingness to submit written cases, and ask questions. Dr. Ghaddar has instilled confidence in the palliative care team and helped the project to thrive.

Dr. Ghaddar is a medical oncologist and hematologist, and has practiced with Texas Oncology since 1995. He is also Clinical Associate Professor of Medicine at the University of Texas Rio Grande Valley, where he serves as the clinical oncology coordinator for the internal medicine residents and organizes the hospital tumor board. He is involved in community clinical research, serving as regional principal investigator for several national clinical trials.

Dr. Dorey Glenn is a pediatric nephrologist whose first volunteer assignment with HVO was with the pediatric project in Bhutan in 2016. Since then, he had a second assignment in Bhutan in 2017 and volunteered in Cambodia in 2019. He made a lasting impact on the pediatrics department at Bhutan’s Jigme Dorji Wangchuck National Referral Hospital, specifically on the burgeoning pediatric residency program. Dr. Glenn was nominated for the Golden Apple by his colleagues in Bhutan.

Since there is no pediatric nephrologist in Bhutan, his contributions in this area have been integral to the training of the pediatric residents and pediatricians on staff. Dr. Glenn provided case discussions, didactic lectures, supported and mentored residents with their thesis research, and encouraged residents to apply for additional training and workshops. With his support, the department started pediatric peritoneal dialysis in the pediatric intensive care unit and has plans to set up pediatric hemodialysis. When not physically present in Bhutan, Dr. Glenn continues to support the residents by being available for consultations and case discussions, and he created an online forum to discuss difficult pediatric nephrology cases.

More broadly, Dr. Glenn was integral in creating a strategic partnership between HVO and the American Society for Pediatric Nephrology (ASPN) and the International Pediatric Nephrology Association (IPNA) to launch a new initiative supporting pediatric nephrology education and training in low-resource settings.

Dr. Glenn is currently an Assistant Professor of Medicine and Pediatrics, UNC Kidney Center at the University of North Carolina, Chapel Hill. His passion for nephrology developed after his residency training in pediatrics while practicing inpatient medicine in a rural district hospital in Butare, Rwanda. There, he thrived on the challenge of using limited resources to diagnose and manage complex renal diseases. His primary career interest as an early-career physician-scientist is on reducing treatment-related complications of glomerular diseases.

Dr. Linden became a project co-director of the HVO hematology project at Carlos Seguin Hospital in Arequipa, Peru in early 2020. Prior to taking on the role of project co-director, Dr. Linden first volunteered with the project in 2016 and again in 2019 and serves on the HVO Hematology Steering Committee.

Dr. Linden has helped the Hematology and Pathology departments at Carlos Alberto Seguin Hospital improve their diagnostic skills to provide more accurate diagnoses to their patients. During his volunteer trips he assisted with conferences about hematopathology, implemented pathology rounds to discuss difficult cases, and provided training in immunophenotypic, cytopathologic and histopathologic diagnosis of hematologic diseases.  In addition, he sponsored Dr. Mauricio Postigo (a pathologist in Arequipa) at the University of Minnesota as a visiting scholar in 2017 to provide specific hands-on training in bone marrow morphology.  That same year, he implemented a monthly case conference call through the American Society of Hematology (ASH). These conference calls have been of particular importance this past year. Lastly, he procured two-headed microscopes for the Pathology and Hematology departments.

Ms. Maria Catherine Arlene S. Pingoy is the Deputy Chief Nursing Office and Director of Education and Quality Programs at Sonja Kill Memorial Hospital in Phnom Penh, Cambodia. The charity hospital was built with the goal of improving the health situation of Cambodians, especially children and expectant mothers, regardless of their ability to pay. Last year, Ms. Pingoy added the role of on-site coordinator for HVO’s nursing education project to her responsibilities.

During the COVID pandemic HVO has had to restructure projects from in-person volunteering to e-learning. In her short time as on-site coordinator, Ms. Pingoy has become essential to implementing e-learning at this project site. Initially, she worked with the wound care team alongside HVO volunteer and project director Patricia Larsen, PT, CWS, OMS to implement eight on-line lessons in wound care. Next, she worked with HVO volunteers to develop a neonatal nurse training curriculum which began this year. Ms. Pingoy continually shows her dedication to her local nursing team through her determination to provide training opportunities for them.

Ms. Pingoy received her Master of Science in Nursing from the University of the East Ramon Magsaysay Memorial Medical Center in Manila, Philippines. She has been a registered nurse since 1993. From 2004 to 2016 she was the full-time Faculty and Clinical Instructor at Lyceum of the Philippines University, College of Nursing in Manila. Prior to her current position, she was a Clinical Nurse Educator at Royal Phnom Penh Hospital.

Dr. Suarez-Londono became a project co-director of the HVO hematology project at Carlos Seguin Hospital in Arequipa, Peru in early 2020. He first volunteered in Peru in 2019. He has shown his dedication to education through his work with this project.

Since his first HVO volunteer assignment in 2019, Dr. Suarez-Londono has made a significant impact on the hematology project in Arequipa. He has assisted with conferences and kept the department up to date with the latest advances in hematology and oncology through the American Society of Clinical Oncology (ASCO) and ASH. Specifically, he helped the hematology department improve their clinical management of acute myeloid leukemia, some types of non-Hodgkin’s lymphoma, and myelodysplastic syndrome. This has improved the quality of care for patients with these diseases. He also assists with the monthly case conference calls.

Dr. Suarez-Londono is a Clinical Assistant Professor at New York University, Perlmutter Cancer Center as well as the Co-Director of Hematology Curriculum at New York Long Island University School of Medicine. He completed his residency in internal medicine at St. Luke’s Roosevelt Hospital in Columbia University College of Physicians in New York, New York and his fellowship in hematology and oncology at Albert Einstein College of Medicine in Bronx, New York.

To learn more about the award and how to make a nomination, click here.

DONATE
Help Bring Health to All